Description: Spotted-thighed Frogs have dark green or brownish patches with bronze or gold highlights on their back and numerous yellowish spots on the underside of their rear legs. Males may be up to 65 mm, females to 85 mm.

Habitat: Spotted-thighed Frogs naturally occur in the southwest and arid zones of Western Australia, from Dalyup River east to Israelite Bay and inland to Scaddan and Coragina Rock. They are found near swamps and permanent water, such as dams. They are frequently seen around well-watered gardens and farms. They hybridise with L. moorei at the western edge of their range and recent research shows them to be genetically identical (Dale Roberts, pers. comm. 2015).

Conservation status: Recent taxonomic works on the genus Litoria have suggested reclassifying this species as Dryopsophus cyclorhynchus or Ranoidea cyclorhynchus. At present we continue to use Litoria cyclorhyncha, as this is still the name commonly used in Australia. It is a common species in Western Australia and its range is well protected by National Parks.

Call description: Males call from late spring and in summer around the edges of pools. Their call is a series of long rising notes followed by various growling noises.

Breeding behaviour: They breed in spring and summer. Their breeding biology is unknown but is presumed to be similar to Litoria moorei. (Refer to WA Museum site for more information on L. moorei http://museum.wa.gov.au/explore/frogwatch/frogs/motorbike-frog). Tadpoles can survive in highly saline water (Dale Roberts, pers. comm. 2015).

Easily confused with: Other than the spots on their thighs, this species is indistinguishable from the more westernly distributed Western Australian frog, Litoria moorei.

Interesting facts: The Spotted-thighed Frog has been transported to Ceduna in the last few years and has since become established in Port Lincoln and Streaky Bay. Some of its genetic, physiological and behavioural traits raise concerns that this frog has invasive potential and might spread further eastward into the Murray-Darling Basin and displace threatened species such as Litoria raniformis. 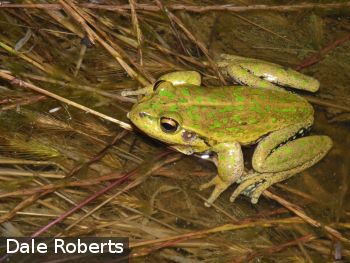 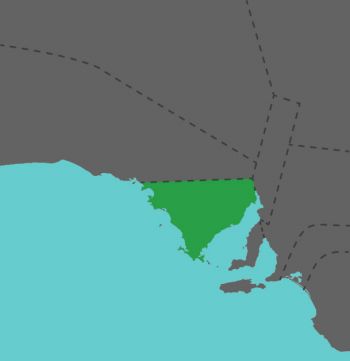