FrogWatch SA fills a gap left by previous citizen science frog survey programs. It uses new technologies, is community driven and covers as much of South Australia as possible throughout the year. 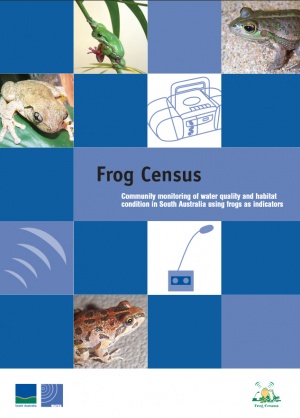 The EPA Frog Census, South Australia’s first major on-going frog survey program was set up by the Environment Protection Authority in 1994 as an extension of the Kids For Landcare Frogwatch program that had been undertaken by many schools since 1990. Citizen scientists were called upon to provide frog survey data each year for one week in September. The EPA Frog Census program provided a “snapshot” of SA frog distribution and abundance. Changes in frog populations were watched. Before the EPA program ended in 2007, there were over 2300 community groups and individuals monitoring frogs at more than 3600 sites.

In recent years both Natural Resources Adelaide and Mount Lofty Ranges, and Zoos SA invested in keeping frog surveys going. In 2015 Zoos SA recognised the need for a new generation frog survey program and has now developed FrogWatch SA, with sponsorship from business, state and local government, and guidance from frog experts across SA and Australia.

FrogWatch SA is a collaboration of state, local government and non-government organisations. It supports individuals, schools and local groups to gather more information than was possible with previous programs and technologies. Frogwatch SA aims to give us a more comprehensive understanding of how our frogs are tracking over time. With your support, it will provide information to help us discover and describe new types of frogs and expand the known distribution of frogs, particularly in the more remote areas of South Australia.