Description: The Cane Toad is an introduced pest in Australia. It is a large and heavily-built frog with dry, rough, bumpy skin. Their back is grey, yellow, olive-brown or red-brown in colour and their belly is pale with dark mottling. Their hind feet have leathery webbing between the toes and their hands are unwebbed. Adults have large swellings (the paratoid glands) on each shoulder behind the eardrum, which excrete a very poisonous substance. Males are smaller and wartier than females.

Habitat: They occur in open clearings in urban areas and in grassland, woodland, sand dunes, coastal heath, to the margins of rainforest and mangroves. The only occurrences in SA have been transported accidentally in produce from northern parts of Australia. They are considered to be a potential invader into SA during floods down the Cooper Creek or the River Murray.

Conservation status: A declared pest in SA under the Natural Resources Management Act (2004).

Call description: Their call is similar to a 'purring' sound or a high-pitched dial-tone on a telephone.

Breeding behaviour: They can breed in most still or slow-flowing water, and tolerate salinity levels up to 15%. The female lays 8000 to 35000 eggs at a time and may produce two clutches a year. The eggs hatch within 24-72 hours. Cane Toads can grow very quickly and may reach sexual maturity within one year.

Easily confused with: The Cane Toad can be confused with the native Eastern Banjo Frog Limnodynastes dumerili or the Painted Frog Neobatrachus pictus. They are distinguished from native Australian frogs by their pupil shape and orientation, their large paratoid glands and relatively big size. They sit upright and move in short, rapid hops.

Interesting facts: Cane Toads were released in northern Queensland in 1935 to help control beetles that were damaging sugar cane crops. But they quickly became pests, moving widely across the landscape and rapidly poisoning native species. Native predators are particularly vulnerable and die after eating Cane Toads. Because Cane Toads aren’t native to Australia, there are no natural predators or diseases to control them or to keep them in check. 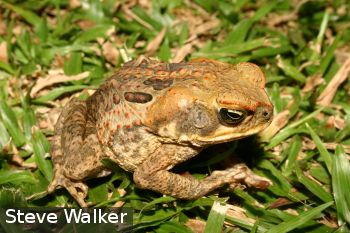